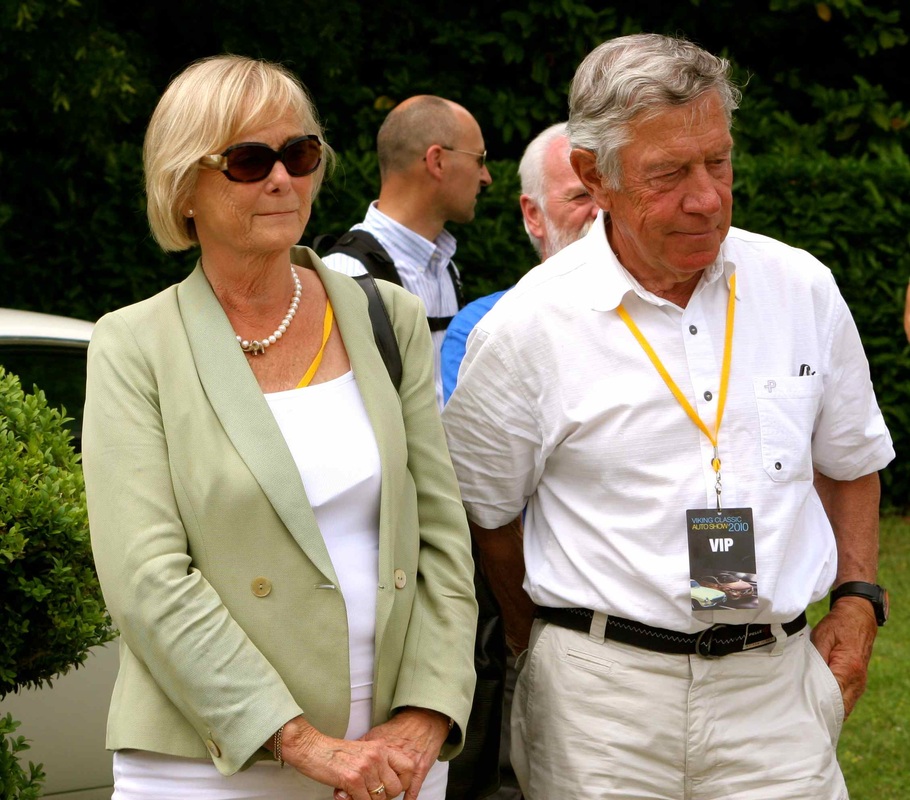 ﻿Now 77 years old, Pelle Petterson remains completely unimpressed by his own efforts as a car designer.  He just shrugs his shoulders that, for more than 50 years, Volvo consciously ignored the fact that it was him and not the Italian carrozzeria Frua that had styled the P1800 sports coupe.  In fact, Petterson can’t really understand the growing interest around him and the P1800.

He’s happy to receive a visit, however, and is especially pleased to see the two models we ‘ve bought with us – both photographer Lofstedt and I own P1800s, and meeting the man behind the car is a long standing ambition. We’ve  invited ourselves to an impromptu “car signing” at Pelle’s house on the eve of the model’s 50th anniversary in 2010.

Suntanned, weather beaten and dressed in ‘Pelle P’ his own range of clothing, Petterson welcomes us to his waterfront home in the little town of Kullavik, 25km south of Gothenburg, from which he has been turning out designs for many years.  Apart from the Volvo P1800, the only other car he worked on was the NSU Prinz, but Petterson has been involved in plenty of other industrial design projects. He is still an Olympic yachtsman and has spent most of his life either sailing competitively or designing boats, including the popular Maxi Yachts.

After offering around the Danish pastries, our affable host begins to tell us how it all started: “I grew up with a father ‘Helmer Petterson’ who was a real car freak.  He was a racing driver and I remember those days at the track very clearly – that was something to look up to!  My father was also an inventor, and he developed wood/gas generators for cars during the war.  That was what brought him into contact with Volvo.  He had good taste and a fine sense of form and, although he had no training, he was a talented practical man.

When Volvo decided to build a new car in 1943, my father was given responsibility for the project and from time to time I was allowed to follow him to work and watch him developing the car, which had been dubbed the PV444.  I used to race soapbox cars and I got a lot of help from my father and won races in a car built specially for me by Volvo carpenters.  I later studied maths and physics before training as an engineer and travelling to the USA to study design.

Volvo had commissioned a sunshield design from my father ‘s company, and it was the royalties from that product that paid for my studies at the Pratt Institute in Brooklyn – one of the best design schools in the world at the time.  I was an accomplished draftsman and carpenter, and that was what I liked doing best.  I completed my studies at just the right time, because when I finished my father got me a job with Frua Design in Torina. ﻿

In order to enter the American market, Volvo wanted to build a sports car from glass fibre – still a relatively new material in the 1950’s.  The project, which was christened the P1900 was plaqued by technical problems and in the end only 67 examples of Europe’s first glass fibre car were built.  The dream of building a desirable car for the American market remained alive, however, and the unfortunate P1900 paved the way for an all-new sports car, the P1800.  And this time Volvo succeeded.

“What they wanted was to build a smart GT model, based on standard Volvo components.  The plan was to outsource the car’s manufacture because Volvo’s Swedish plant didn’t have the necessary capacity.  My father had taken the P1900 on a tour of a number of coachwork factories in Italy while test-driving the car and been impressed by these firms ability to bend, press and form sheet steel.  Luigi Segre, the man behind both carrozzeria Ghia and Frua, was a designer who clearly knew his stuff. Volkswagen had already fully booked Ghia’s design capacity for work on its Karmann-Ghia, and that was why my father recommended that Volvo place the design for the new P1800 with Ghia’s subsidiary, Frua.”

Volvo listened to Petterson senior, and the project was duly passed to the Turin coach-builder.  At the same time,  Helmer managed to secretly ensure that the newly qualified Pelle, then aged 24, would be employed by Frua so that he could propose a design for the new car.

“My father got me the job.” Explains Petterson, “but he did it very discreetly.  No one at Volvo new that I was employed by Frua.  Volvo decided to initiate the project in the summer of 1957 and wanted to see five proposals, so I travelled to Fura in Torina to draw one.  The Itailans weren’t very good at visualizing or presenting the projects but  I was, and they were so pleased with my drawings that they set me to work on the other four proposals, too.

I got a bit of help with the practical side of the modeling from Frua’s foreman, Nocolotti.  Pietro Frua was a perfectly amiable chap, but he was a craftsman and a coachwork man and had no comments on my design whatsoever.   I was inspired by, among other things, the Corvette and the Thunderbird – an Italian would never have put fins or chrome on a car!  I really felt my way into the work.  The curved lines on the side of the car just cropped up on the page.  I like to think its quite special.”

Story has it that, when Luigi Segre and Helmer Petterson presented the five designs to Volvo Director Gunnar Engelau, he immediately selected Pelle’s drawing and said that it was the car he wanted.  When he found out that the young Swede and his father had gone behind his back he was furious, and demanded that it remain a secret.  Petterson’s design success was attributed to Carrozzeria Frua for many years and his name was, effectively swept under the carpet.

“I think the fact that it was me who designed the car first became public in the USA,”  he recalls.  “My father and Engelau later had something of a rapproachement, but it wasn’t until about 1970 that it became common knowledge.  Actually it has been only really been in the past 10 years that I’ve been properly credited as the car’s designer.  It did disappoint me, but I suppose that Volvo thought it would ruin the car’s Italian image if it became known that the designer was actually a young Swede.   I’ve been officially recognized by Volvo now, though, and have even been invited to anniversaries, so th they’ve loosened up a bit over the years.  I don’t really know if it matters all that much.  Obviously I’m flattered by the interest there has been in it, but my life has been full of so many other things.  I don’t live and breathe for that design as others may do.” 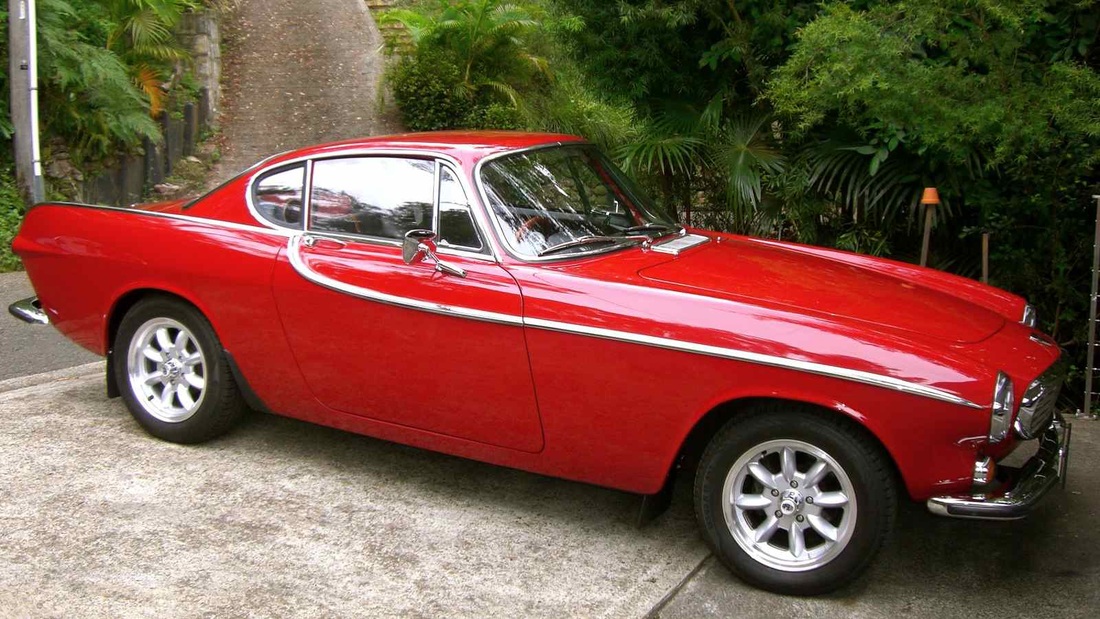 The new project was codenamed “Florida” and everything seemed to be ready.  Carrozzeria Frua built the first three prototypes, and Helmer Petterson reached an agreement with Ghia to manufacture the vehicle.  Everything was ready to roll but in February 1958 Volkswagen forced Ghia to drop the P1800.  Bosses were worried that it would compete with the Karmann-Ghia, which they also had engaged Ghia to build.  It looked like being the end for the P1800.

“The project had more or less run out of steam, but my father was very eager to see it through.  At one point he even considered manufacturing it under his own name, but that might also have just been something he said to put pressure on Volvo.  Several different solutions were suggested.  Heibronner Carosseriefabrik Drauz took a look at it, and in mid-August 1958 Hanomag offered to manufacture the Florida for nine million Swedish Kroner, but nothing came of it.”

It began to look as if the P1800 would never see the light of day.  Volvo had made no official announcements about the new coupe but, after a mysterious press release turned up with a photograph of the car, Volvo ws forced to acknowledge its existence.  From that point on, Project Florida started to gather momentum.  Volvo approached Jensen Motors in the U.K, which accepted a contract to build 10,000 cars.  Jensen reached an agreement with Pressed Steel of Scotland to supply the monocoque shell and began building the car.  The P1800 made its debut at the International Motor Show in Brussels in January 1960, and the first production P1800 (1961 model) rolled off Jensen’s assembly line in September to greet an eager public.

Along the way, however, a few slight changes had been introduced to the car.  They altered a number of details.  I had envisaged the exhaust  as being central, but they moved it to make room for the number plate.  I also wanted to give the P1800 broader tyres and rims, but the car’s construction simply couldn’t handle them.  I’ve subsequently seen some cars on which those sorts of alterations have been made and they look really good.  I like the car’s original front end.

The grill was good, but unfortunately it was removed as a cost saving when the car’s manufacture was moved to Gothenburg in Sweden.  The clock and the switches also came in for some criticism later on because they could cause injuries to the driver in the event of an accident.  The big steering wheel was a must because there was no power steering.

In 1961, the P1800’s marketing department received an added boost from an unexpected quarter with the young actor Roger Moore, who was cast as Simon Templer in a new role English TV series, “The Saint.”  The producers wanted Moore to drive something sexy and, when Jaguar refused to bump the star up the waiting list for a new car, ITC opted for the stylish Volvo.  The P1800 appeared in all the episodes, which were broadcast across the world “It was interesting seeing the car with Roger Moore, says Petterson. “The Swedish P1800 club says that I designed the car, but Roger Moore sold it.”  I’ve met him a few times, he’s a nice man.  I think it meant a lot for the success of the car.”

In 1963, Volvo decided to move production of the P1800 back to Gothenburg.  There was spare capacity at the plant.  Furthermore, Volvo wasn’t satisfied with the quality of the product that Jensen was turning out.  The contract was re-negotiated, and in the end Jensen built only 6000 cars.  In connection with the move, a number of design details were changed and several technical alterations were carried out.

The engine was upgraded to a 2 litre, four cylinder and the bumpers were flattened and conjoined.  The powerful grille design was replaced with a cheaper wire mesh version, while Petterson’s signature curve was straightened out.  The modified P1800’s type designation was ‘S’ for Sweden and manufacture continued largely unchanged until production ceased in 1972.

In 1971, Volvo released a sports estate version of the 1800, the ES.  It had a fuel injected engine shared with the 1800E, and an elegant glass tailgate. The ES was manufactured for three years, but was designed without any imput from Petterson.  “I wasn’t consulted about any of those changes, there was no contact with me at all.  I’d been out of the picture for some time, and I’m not a fan of the sports estate that they made towards the end.  They ruined the car, really.”   “I’m a bit taken aback that now, in my old age, the car which was made more than 50 years ago, has become a bit of a classic,” smiles Petterson.  “It’s a fairytale.”

​​Photos:  For this article are from Gerry Lister in Sydney.   http://volvodownunder.com.au

Note: Permission has been given to reproduce this article (June 2010 Volume 29, No. 3) from James Elliott,
Editor of Classic and sportscar.   www.classicandsportscar.com 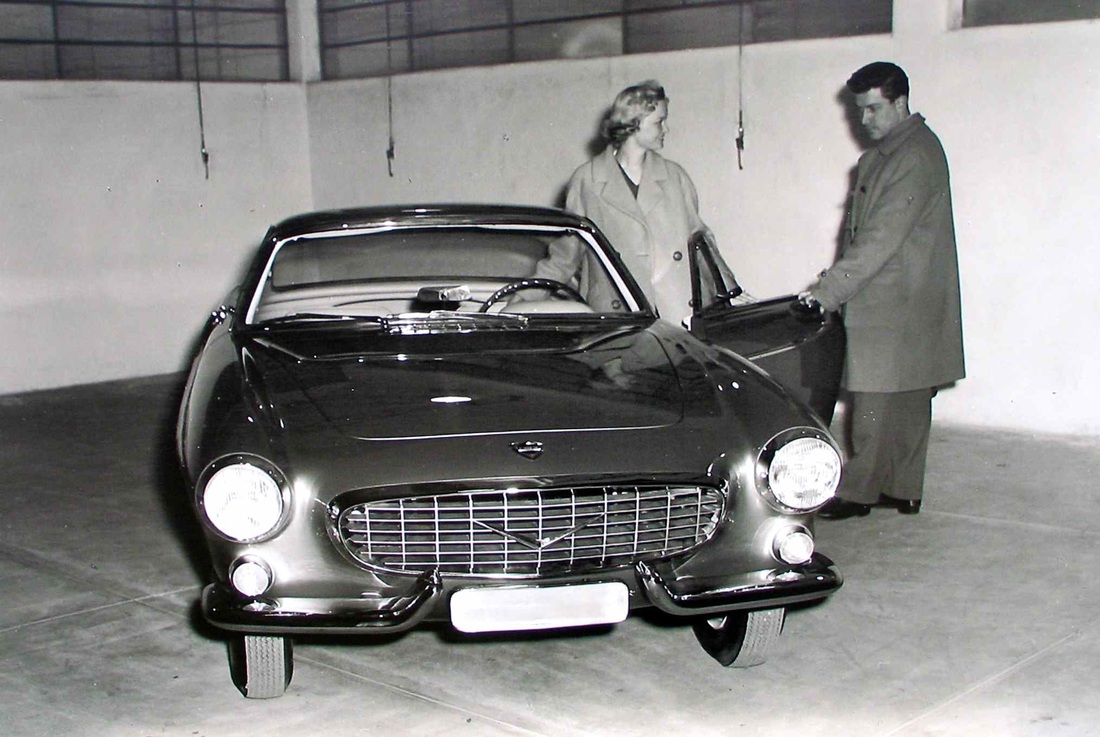