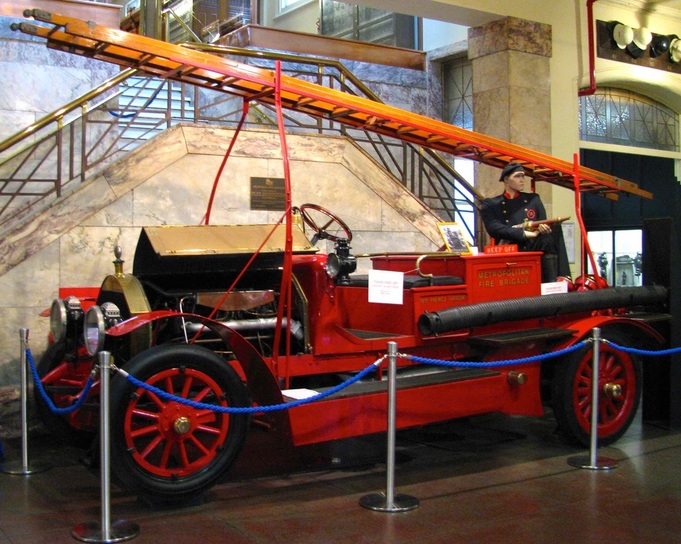 The Fire Services Museum is located on the corner of Gisborne St. & Victoria Pde, East Melbourne

The Fire Services Museum of Victoria began in 1972 as the Melbourne Fire Brigade Historical Society when a number of people became concerned at the amount of historic MFB material that was quite literally "going to the tip".

​These individuals gathered items of interest, and held them privately, but also told others what they had saved, leading to these like minded individuals forming the genesis of the current Museum.

​In 1979 the former Eastern Hill Headquarters Fire Station on the corner of Gisborne Street and Victoria Parade, East Melbourne, became available.  For the first time the collection was gathered out of back rooms, sheds and a myriad of other "secret storage places" into one place where it could be adequately displayed to the public as the Melbourne Fire Museum.

​In 1991, the Museum had grown further, but realised that it had a very "Melbourne centric" focus.  Consequently the group reformed as the Fire Services Museum of Victoria and expanded to preserve and display Victorias's Fire Service History, not just Melbourne's.

The Museum currently holds over 10,000 memorabilia items, photographs, documents, vehicles and uniforms not only relating to Victoria's Fire Services, but Fire Services from interstate and overseas.  The Museum is in fact one of the largest single collection of the fighting memorabilia in Australia.

The Museum is run and managed wholly by volunteers and relies on admission fees and donations.  Volunteers range from former and serving fire fighters, mechanics, technicians or those who have a passion for history. 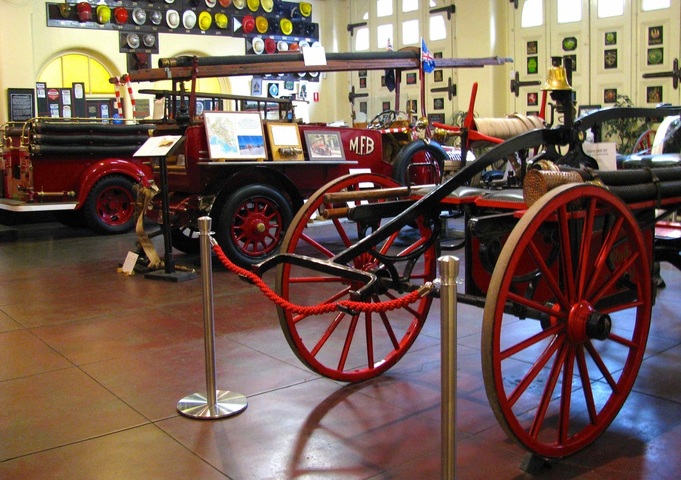 In the years leading up to 1891, fire protection in Melbourne and surrounding suburbs was provided by:
​
Insurance Brigades - provided protection to those who had insurance and displayed their insurance company
"Fire Mark" on their building.
Volunteer Brigades - were provided by many different organisations or townships.
Municipal Brigades - were funded and operated by some city councils.
Private Company Brigades - operated by large busines and companies, such as the Carlton United Breweries.

Insurance Companies had their own fire brigades and initially responded to all fires that were reported.  When the brigades arrived on scene and found the opposition company's Fire Mark being displayed, the brigades were not obliged to fight the fire.

On the fire ground there was no command and control, different brigades fought for control of the water mains and control of the fires.  The brigades did not work well with each other and had equipment that was not compatible with each brigade.  Some brigades did not even attempt to fight the fire, but rather return to station and allow the building to burn.  This was most prevalent with Insurance Company Fire Brigades who were competing for business. 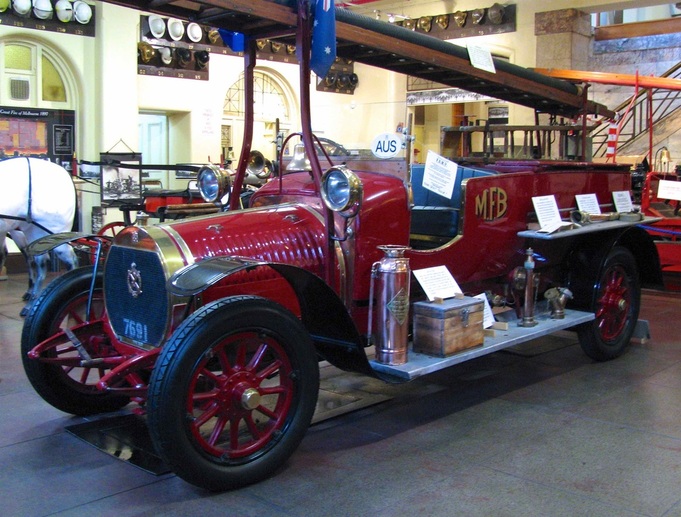 On April 1891, the Fire Brigade Board met for the first time, at this meeting it was decided to purchase a site for a Brigade Headquarters on the corner of Victoria Parade and Gisborne Street, on the Eastern Hill, at a cost of 12,000 pounds.  This site was chosen for its elevated position, Eastern Hill being the highest point in Melbourne, which would give a down hill run in all directions for the horse drawn fire carts.

The erection of a lookout tower would give an uninterrupted view of Melbourne and the surrounds administered by the brigade - approximately 10 miles in any direction from the GPO.

​Competitive designs were called for the building which was to have a 150 feet lookout tower, 3 engine bays, 1 ladder house and accommodationfor the Chief Officer and his fireman, the cost not to exceed  16,000 pounds.  There were 63 entries.  Two of them were accepted, the firms of Smith & Johnson, for the design and working drawings, and Lloyd Taylor & Fitts for the superintendance and detail drawings, were appointed joint architects.

​Tenders and style of building

Tenders were then called for the erection of the building, and that of T.Cockram & Co. was accepted at 16,000 pounds, the contract signed at midday on November 15, 1892.  All work was to be completed by September 1893.  This firm of builders has constructed many well known buildings, included amongst which were the Federal Hotel in Collins Street, Windsor Hotel and Princess Theatre in Spring Street, Captains Cook Cottage, and the Rivoli Theatre in Camberwell.

​Some of the detailed specifications for the Eastern Hill fire station called for the Queen Anne style building, to be faced with red bricks of the best manufacture, hard Hoffmans's well burnt and tuck-pointed with dressing of cement.

The fire station was officially opened on November 3rd 1893, before a large number of ladies and gentleman who had accepted the invitation of the Metropolitan Fire Brigade Board to inspect the station and witness a parade by the brigade.  Included in the appliances used in the parade were 8 steam fire engines, the Hayes extension ladder and 20 hose carts.  There were also 200 firemen present who were marched past by the Chief Officer D. Stein. 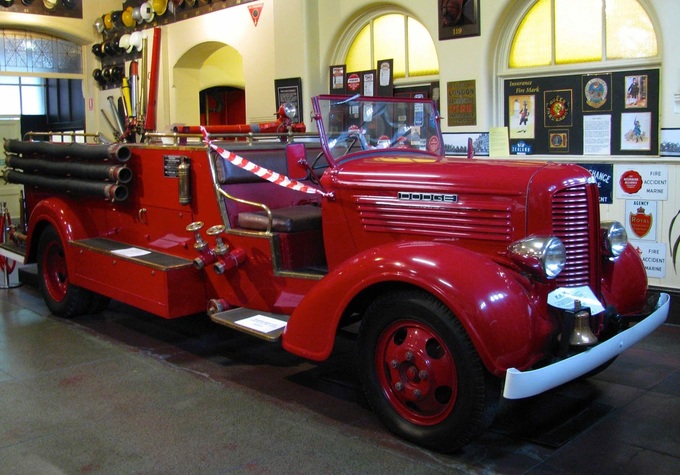 Australia's largest collection of fire brigade memorabilia including a year round display of vintage fire vehicles and other appliances, helmets, 18th century uniforms, badges, models, and much more.  Over 10,000 fire related items collected both nationally and internationally.  Historical photos of firefighters and fires of the past.  A shop with fire fighting memorabilia for young and old.

The Metropolitan Fire Brigade next door conduct Fire fighting demonstrations most Fridays throughout the year.  We don't run them, their an MFB event.  Bookings are required.

New Members would allow the Museum to open on additional days.  New members at the Newport workshops would allow outstanding projects to be under taken and it is a great opportunity for qualified volunteers to work on some great vehicles.

Vehicles are retired fire appliances ranging from 1910 through to recently decommissioned vehicles.

Some of the makes include, Hotchkiss, Dennis, Morris Commercial, International, Dodge, Fargo, Scania, LaFrance, Magirus, Freightliner, Scania, Leyland.   Many of these vehicles are long term projects.
​
The museum maintains a working fleet of these vehicles to enable it to for fill requirements as requested.

Cartalk photos taken at MFB, from top to bottom

1911 Pierce Arrow, know as the  "Melba Pump",  as it was converted from a car owned by Dame Nellie Melba.

​Click on the Google map logo below to enlarge the map for the area in the inner eastern suburbs of Melbourne.
The Watchroom and the Watch Tower - see photo below

This originally was the hayloft for the stables, which used to be situated directly below.  Following the sale of the last fire horse in 1919 and the growing need for a larger watch room, the hayloft was converted into a new watchroom.  In 1927, the watchroom went live, with it operating until 1984 (as they had moved into the new grey concrete building next door) and being monitored until 1991, when it was shut down.

​The watch room was manned by three firefighters. 24 hours a day and was processing up to a thousand fire calls a week.  Being the headquarters station, all fire calls from the MFB's 42 stations were processed through this watch room.  A hand written occurrence book was kept in all watch rooms where the movement of personnel, equipment and appliances were noted.

Where an alarm in a building or in a street fire alarm box was activated, the signal would come to the brigade and activate a circuit in the watchroom.  The fire fighter on duty would take down all the information, collect keys and pass them to the fire fighters attending the fire.

The 150 foot  (45m)  lookout (watch) tower was used as the primary method of identifying fires in Melbourne and was next to the watchroom.  In the early days before popular use of telephones, there would be two fire fighters in the tower 24 hours a day scouring the skyline of Melbourne for fires.  When they would spot a fire, there was a telephone connection in the tower to the watchroom, where they would pass on the details.

On the southern side is an added structure which used to be used for fire fighting drills.  At one time, part of the recruitment process was that prospective candidates had to scale two stories of the structure using a Pompier Ladder.
They further had to jump from both the first and second landing into a jump sheet held by other fire fighters, not to do so would see your application revoked. 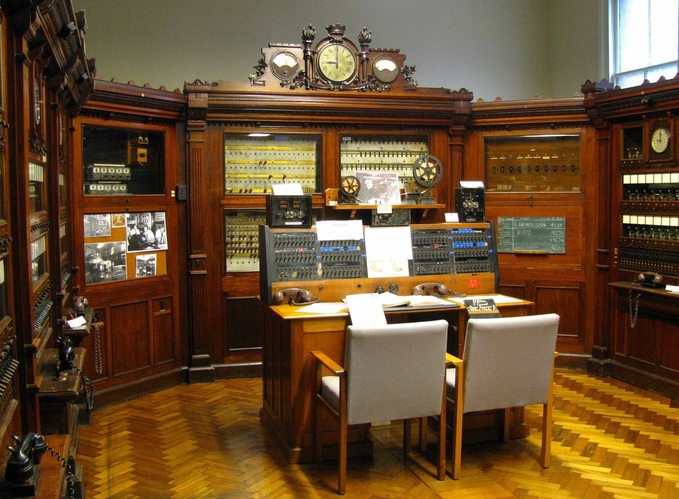