Massaro Motors have been in Morwell since 1973

​For more than 45 years Massaro Motors has grown from modest beginnings under the direction of Ray Massaro.  If you live in the Latrobe Valley, there is a chance that you may have purchased a new or used car or farming equipment from Ray in Morwell.  As a self-made business person, Ray has benefitted from a can-do attitude and the courage to take risks.  From day one, he has never been afraid to set high ambitions in business.

Ray was just 23 years old when he established the business, by purchasing a disused Shell service station and roadhouse at the edge of of town on the corner of Princes Drive and Bridle Road, Morwell.  He then secured a franchise with Chrysler.  After some modifications to the property Massaro Motors was ready to begin trading in February 1974.  They opened with three new cars for sale, and all were Chrysler Valiants.

Over the past four decades, the motoring brands in the showroom and forecourt have evolved, but the Massaro name has remained a constant and instilled a sense of trust among buyers in the local area and in Gippsland region.  Massaro Motors was a multi franchise for Land Rover, Volkswagen and Suzuki vehicles (now sold).  It currently still holds an agency for Kubota, Suzuki motorcycles, Krone hay equipment, Digga, Burder, Farm Implements Australia, Hansa chippers, Silvan, John Berends, Trimax, Quicke and Bare Co.  The company has the capacity to service and repair any make and model of vehicles, tractors and farm machinery. 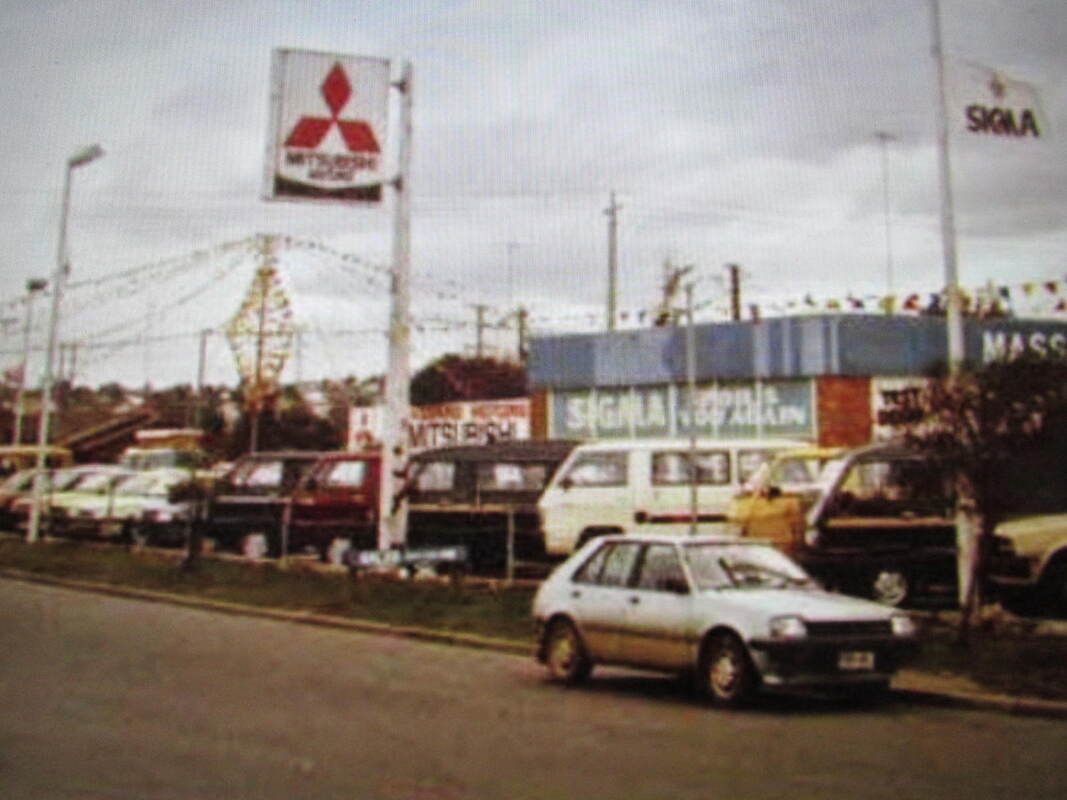 Ray started a Chrysler Dealership on his own in his 20's in the 1970's and the brand name changed to Mitsubishi in 1980.
Starting as an apprentice motor mechanic

Before establishing Massaro Motors, Ray had been working for Travally Motors, a local family-owned Chrysler Dealership with sites in Morwell and Traralgon.  He gained more than five years of experience at Travally Motors, commencing as an apprentice motor mechanic at the age of seventeen.

"I had always tinkered with machines and equipment and welded things as I'd grown up.  Having decided to learn a trade after leaving school, I was either going to be a boilermaker or mechanic.  It was just a matter of who ever offered first," Ray confirmed. "The Travally Motors management saw potential in me and I completed my four-year apprenticeship with them.  Despite my young age, they recognised my ability as a problem solver and I seemed to get all the difficult jobs."
​
Ray was promoted to service manager by the then owner Rod Cook at Travally Motors, a role he performed for 18 months before the family sold the business to concentrate on their farming and other interests.  Under new ownership, the business changed to a Datsun dealership and Ray soon found himself contemplating a major change of his own.

"I struggled to fit in with the new owners and it wasn't long before deciding to go out on my own."  Ray prepared a business plan and approached the Chrysler Head Office in South Australia in the hope of gaining a franchise.  I must have sufficiently impressed the decision makers, who examined his application in close detail and subsequently endorsed his appointment as a Chrysler dealer."

At the time, Ray was engaged to fiance Dianne, who remains his wife today.  The disused Shell service station in Morwell that Ray purchased as the site for Massaro Motors in August 1973, included a three bedroom house that became a home for him and Dianne.  The roadhouse restaurant was turned into the spare parts department, a small team of staff was recruited and through his determined effort Ray had his own fledging business up and running within just six months.

​Although servicing was Ray's area of expertise, he had to become an all-rounder in managing his own business. "Overalls were his work uniform, but through necessity he become involved with all management of the business, including the administration side.  Dianne (wife) worked in the office when they started.

"Everyone I employed was hands on and multi skilled.  Whatever had to be done was done and everybody chipped in. That's what I did and I expected them to do the same."

Ray's hard work paid dividends and the business grew quickly.  Within two years, Massaro Motors had added Land Rover as a second brand with Chrysler and then Suzuki followed the year after.  The agricultural side of the business introduced in the late 70's with Kubota and during the 1990's Chrysler was phased out of production and replaced temporarily with Mitsubishi, before Volkswagen became another flagship brand for the business over 20 years ago.

"We have experienced exceptional growth with all our brands Volkswagen, Land Rover, Suzuki and Kubota.  They have proven to be very stable and solid performers for our business.  We essentially brought Volkswagen to the Gippsland market as the brand had not been active in the Australian market for many years.  Our VW sales have been growing 20% a year for the past 10 years."
​
According to Ray all sections of the business at Massaro Motors have been going from strength to strength in the last decade.  Volkswagen's entry into the Australian market has seen the brand become the largest European importer in the auto industry.  "We have seen many ups and downs in business over the past 40 years, with industry privatisation & restructure, fires and other disasters.  Overall Gippsland and the valley has been quite resilient and has continually evolved with constant growth."  The three auto brands, VW, Suzuki and Land Rover have now been sold.
Business expansion

As the business expanded over the years, it became necessary for Ray to acquire further land at the back of the Princes Drive site to allow sufficient space to accomodate multiple dealerships.  But the growth at Massaro Motors has not been restricted its forcourtsize or volume of its vehicle sales.  Over the past 40 years, staff numbers at the Dealerships have increased from six to 50 today, including a number of long-time loyal employees.

Ray and Dianne have raised a family of six children, the first two of whom were born while living on the premises at Massaro Motors.  They subsequently knocked down the house at the dealership to make way for expansion plans and purchased a property at Delburn near Mirboo North to raise and educate the children.  As their family grew, the couple twice extended their farmhouse before eventually moving to a five bedroom house in Tyers,
​
All three sons and three daughters still live in the local area and have five grand children.  Luke is the only child currently working in the business and making a permanent career of it.  Luke currently manages the agricultural side of the business and has taken the Kubota tractor division to the highest Five Star Performance level.

Now at 68 years of age Ray has no plans to retire from the business. He still looks forward to going to work every day when he get's up in the morning.  As the Managing Director Ray maintains an extremely busy schedule in his working life, but over the years has still managed to devote time to other interests and be active in the local community.

During the early 1980's Ray was instrumental in reviving the fortunes of the Thorpdale Football Club, including as serving President for five years.  In a notable achievement, Ray assembled a group of twenty willing workers to instigate a major redevelopment of the Club's facilities.  The hard work paid dividends, with both the Thorpdale Seniors and Reserve teams winning the Grand Final in 1986 and then reshaping the football oval and building brand new clubrooms for football, tennis, cricket and netball and all housed in the new facility at the recreation reserve.

Ray also served on the Former Morwell Council in the early 1990's for one term (4 years) with the aim of ending a significant disparity in the rates system in the town at the time.  Creating a groundswell for change, Ray was successful to bring parity to the local council charges.  Through a previous involvement as president of Latrobe Personnel,  Ray helped to assist local people with disabilities he gainfully employed across various businesses from Warragul through to Sale.  He is also a diehard supporter of the Morwell Golf Club, having sponsored the monthly medal day in November since 1974 and many other sporting clubs and groups across Gippsland.

Ray believes his success has been built around adhering to solid basic principles.  "I have always tried to employ good people in keeping with a commitment to providing honesty and good service to our customers and suppliers.  In this industry, those qualities are vital and it is important to also have brand loyalty and provide exceptional customer service.  My philosophy is that you want your brands to be the best in the business, trouble free, progressive, reliable and well made.  Kubota is the most reliable and domestically has the best agricultural product lines in the business."

"The standards of the service any business provides to its customers is absolutely critical.  Our customers are our business.  Ultimately, they have to be happy with our products and everything we do is focused on making sure that happens."

Massaro Motors sold the three car dealerships Landrover, VW and Suzuki in late 2015 to new owners and they now operate in Traralgon on Princes Highway.  Ray was also involved in the start up of the Land Rovers Owners Club in Gippsland.  Ray's favourite car is the early 1960's R & S Series Chrysler Valiant.  See links below.

They employ ten staff (including part time staff) and Luke (son) has been in the business since he left school at 18.  Luke has worked across all the departments over fourteen years and is now the Sales Manager at Massaro Motors.